A Horror Movie Mini-Tour of London

DON’T READ ON IF YOU HAVEN’T SEEN THIS MOVIE!

I finally caught up with the 2006 remake of the horror classic The Omen recently. A well-performed remake with a number of big frights, faithful to the original almost to the point of being slavish, it was an enjoyable Halloween treat, mostly. From a London-spotting point of view, however, the experience was something of a dud with the movie being shot in Prague. Boo!

The 1976 original – with the commanding Gregory Peck in the lead role – teems with London locations. 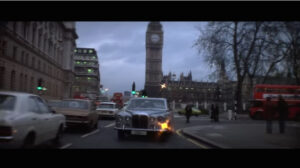 Written by David Seltzer and directed by Richard Donner, the film sees Peck play Robert Thorne the U.S Ambassador to the Court of St James. When his wife – played by the excellent Lee Remick –  gives birth to a stillborn child in Rome, Thorne does a deal with the hospital chaplain to swap the dead child for a newborn orphan. Little does he know that the child is the Antichrist…

In terms of London locations, we kick off with the obligatory shot of Big Ben as Peck’s diplomatic car (back in the day when there was no congestion charge for the U.S Ambassador to dodge!) sails through Parliament Square.

Grosvenor Square features prominently – and the film makers seem to have enjoyed a degree of access to the U.S Embassy that would be unheard of in our high security climate today.

The U.S Embassy has since moved to Nine Elms in South London. The Grosvenor Square building, the work of Eero Saarinen’s (see also the TWA Flight Center at JFK airport) a Grade II listed structure, is being turned into an hotel. One of the suites will, presumably, enjoy this view…

And if it ever comes up in a pub quiz, the large gilded eagle atop the embassy building has a wingspan of 35 feet…

Lovely Bishop’s Park down by the Thames in Fulham is the location for the not-so-lovely scene with Robert Thorne confronted by agitated priest Father Brennan (memorably played by Patrick Troughton). Brennan urges Thorne to kill his child for the sake of mankind.

SPOILER ALERT! SCROLL BACK IF YOU HAVEN’T SEEN THE MOVIE!

It is at nearby All Saints Church, Fulham, under a raging sky with the sound and special effects departments working overtime, that Brennan meets his gruesome end.

The tower at All Saints was commenced in the 1440’s but for the most part the building dates from the 19th century. Among the starry cast list in the graveyard we find the wonderfully named Humphrey Henchman who was Lord Mayor of London during a tumultuous period of real life City horrors – the Great Plague and the Great Fire.

The scene (pictured) would be a gruesomely dramatic climax to any horror movie. Here, it merely marks the end of act one… there’s far worse to come. Little wonder that this nearly-40-year-old film is regarded by horror fans as one of the greatest of all time.