Top 10 things to do in Rotherhithe

Rotherhithe – the hidden gem of South East London. Locals celebrate its genuine village community and nowhere is that more evident than in its traditional pubs, two of which are really rather significant (read on to find out why). Not many English villages can claim a similar richness of history and this London city village is only 20 minutes walk from Tower Bridge along the Thames Path.

The Thames majestically flows by this urban village. From its south bank, you can look across the water to Wapping and Limehouse. To the west, it’s neighboured by Bermondsey and the Isle of Dogs to the east.

Over the years, Rotherhithe Village has witnessed a catastrophic decline in its fortunes only to rise out of the ashes to become a colourful, eccentric, successful, and welcoming place. It’s a fascinating area to explore. This Rotherhithe, London blog highlights some favourite spots with insights from our local tour guide, Tim.

In 1620 history was made in Rotherhithe Village. A ship called The Mayflower set sail from the back of a local historic pub and sailed across the Atlantic. On board was a group of religious zealots, driven to find or create heaven on earth. They were guided by a local captain from Rotherhithe Village and a local crew of 30 hardened sailors. They were The Pilgrim Fathers. They changed history. They founded the United States of America. The indigenous peoples were changed forever. You can visit the pub still on Rotherhithe Street.

Join our Ahoy! The Mayflower Walk to explore this fascinating history further.

Isambard Kingdom Brunel is considered by many to have been the greatest engineer who ever lived. He built everything – railways, tunnels, bridges, flat-pack hospitals and ships including the SS Great Britain (the first ship in the world powered by a propeller and now proudly exhibited in Bristol). But he was a member of a whole dynasty of brilliant engineers. His father, Mark Isambard Brunel created the first production line (100 years before Henry Ford) to fashion wooden blocks to guide the ropes on the Royal Navy’s ships. His son, Henry Mark Brunel was one of the two engineers who built Tower Bridge.

Rotherhithe Village has a special place in the history of these incredible men. Here, Mark Isambard dug the first tunnel under a river anywhere in the world – the Thames tunnel. There are so many stories surrounding this extraordinary feat (including Isambard’s near death) and the Brunel Museum sheds light on them.

Next to The Brunel Museum on St Marychurch Street is Sands Films. It inhabits a Georgian warehouse originally called Grice’s Granary. Sands Films is unique. Run by idealists, it has become a centre of excellence for feature films and the making of historical costumes. Their work is world-famous and just about any historical film, including Hollywood blockbusters, will boast costumes made in this beautiful premises.

Major stars are often to be seen wandering around the village and regularly van-loads of priceless costumes set out to wing their way around the world. The building itself is a treasure store, housing workshops for set-building, dress-making, and millinery. If you take note of the structure of the place, you’ll see that massive oak timbers from the old sailing ships are holding it up. 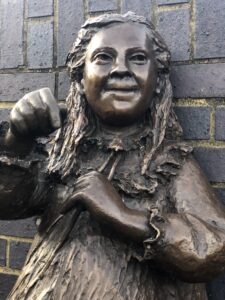 Victorian Rotherhithe was the soft underbelly of the great city. Life was a struggle due to poverty and disease. Work was scarce and much of it was dangerous. But some people cared. Some people wanted to bring about change. Enter Alfred and Ada Salter, husband and wife, both Quakers, both socialists.

At the beginning of the 20th century, they brought a glimmer of hope to Rotherhithe. Alfred Salter opened sanatoriums for people with lung diseases, all free. Ada Salter was a formidable woman, a pacifist, a feminist, and an environmentalist. She laid out parks and planted trees. This was important for her as she cared about people’s mental health as well. They became two of this country’s greatest social reformers, beloved icons of Rotherhithe Village. Their statues by the Thames attest to this.

Nestling beside a beautiful, unassuming little park is The Old Mortuary building, today used as a community centre. Charles Dickens came here and mentioned it in his novel Our Mutual Friend. He was one of many great men and women who braved the dark, dangerous streets of the old port to see firsthand the poverty and desperation of many of the local people. Many were forced into piracy and prostitution to survive. Anything illicit was on sale here. You could buy gunpowder, opium, booze, stolen stuff, and sex. Rotherhithe Village had a ferocious reputation that remained for decades.

Rotherhithe Village is a Phoenix, a creature that has survived the fire to be reborn. From poverty to the Blitz, to the closure of the docks, the place became part of the poorest borough in Britain. It remained so until the ‘70s. And then, through a series of circumstances, it changed. Artists moved into the abandoned warehouses, the empty council flats slowly started to find tenants and then The Docklands Development Corporation stepped in.

With all these bombsites so close to London there was a huge opportunity. Out of the bombsites of the Isle of Dogs, the banking city of Canary Wharf sprung up. Steadily the empty areas have been re-purposed and this part of London is no longer poor. It’s vibrant, and Rotherhithe has become a genuine village community rising out of the flames of the Blitz like a Phoenix. It’s hard to picture that downtrodden district when you look around the smart new world comprising Surrey Quays, Canada Water and Canary Wharf. 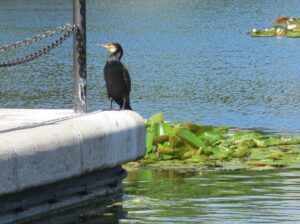 You may be surprised to learn that there’s quite a lot of wildlife in Rotherhithe Village. Foxes regularly haunt in the nighttime. However, it’s the grey squirrels who have truly made the place their own. They may be cute, but there’s a dark side to their residency. Originally, they came from North America and steadily drove out the resident red squirrels. The red squirrels are even cuter, which is a shame. Being bigger and able to withstand certain diseases, the grey squirrels are firmly rooted here now.

Under the eaves of housing estate roofs, you can see many nests. These belong to house martins, small birds related to swallows. Magically, they appear out of the sky each April and enchant the locals with their sensational aerial acrobatics. They breed in Rotherhithe, feeding off insects on the wing. Equally magically, they disappear in September. They migrate. Their return flight takes them over the Sahara Desert ending in the Congo of equatorial Africa. It’s a hazardous flight. Somehow they survive to repeat the epic journey each succeeding year.

Alongside the urban environment, you’ll find some glorious, green spaces. The 25-hectare Southwark park dates back to 1869. It comprises the Ada Salter garden, created by the aforementioned social reformer who championed green spaces for the public. Within this wide open green space, there’s also an art gallery which hosts wonderful, contemporary exhibitions.

Surrey Docks Farm is an actual working city farm in Rotherhithe. It gives people the chance to learn about farming, food production and nature. Kids can get up close to animals in a very different environment to a zoo. 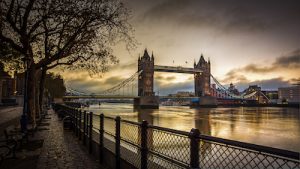 There’s something special about walking along the banks of the River Thames. In total, it’s around 180 miles long from sea to source. From Rotherhithe, you can head east to Greenwich or west towards London Bridge, Borough Market and on to the London Eye.

On the Rotherhithe stretch, The Angel pub on the riverside is worth a mention. It used to be part of Edward III’s palace, the remains of which are still evident alongside it. It’s a good place to stop off for refreshments and watch the watersports (in their infinite variety) on the River Thames.

One of the best ways to take in the special vibe of this village is to stop and people-watch from one of the many cafes. A few of our favourites include the Leaf and Bean Cafe at Rotherhithe station (overground), the Watchhouse Cafe and Canada Water cafe.

How to get here

Rotherhithe Village is served by overground trains to Rotherhithe Station and underground tubes go to Bermondsey and Canada Water stations on the Jubilee Line.

Want to know more about Rotherhithe? Take our London Walk around the area to discover fascinating stories about its past and present.