Virtual  The City of Wolf Hall

By water and by foot…

We begin on the River touring by boat the Tudor palaces that were the backdrop to the drama of Henry’s Court. We then walk around the City to find where the two Thomases lived and died.

The Walk creates a portrait of London in the early 16th Century. It lays particular emphasis on the life and times of Thomas Cromwell and Thomas More, both of whom feature in Wolf Hall, the novel by Hilary Mantel.

More and Cromwell had much in common, both lawyers, commoners, who rose to be Lord Chancellor to Henry VIII and they both ended their career on the block at Tower Hill. But they found themselves on the other side of the gulf that suddenly opened with the religious ferment that accompanied Henry’s obsession with Anne Boleyn.

We start with a virtual boat tour from Hampton Court via Chelsea, Westminster, Tower of London to Greenwich Palace. We then visit the sites of More’s and Cromwell’s townhouses. That’s followed by a walk through the market streets of Tudor London to Cheapside and the Guildhall, St Pauls and outside the walls to Smithfield, where most of the religious executions took place. We visit Charterhouse, where More took a break from the stress of public office, and whose Prior made the mistake of falling afoul of Cromwell. Cromwell had him hanged, drawn and quartered. We exit via the plague pits, and finish off with a walk around the City walls until we come to Tower Hill, where both men ended their lives on the scaffold.

Saints or sinners?  What better place to ponder that question than the streets of  Wolf Hall’s London?

Meet your guide – here’s a little podcast in which Kevin talks about the tour, where it goes, what it covers, etc. 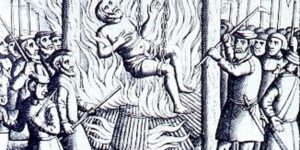 Reserve your place on The City of Wolf Hall