The virtual walk looks at the amazing archaeological discoveries of Roman Londinium. 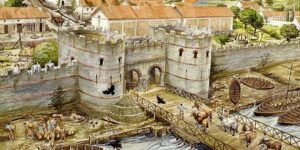 Archaeology has transformed our knowledge of Roman London and this walk takes us around the amazing archaeological discoveries and the stories they reveal. 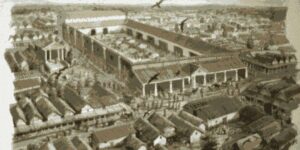 We disembark at the Roman Waterfront by the  Roman Bridge, and investigate the circumstances which lead to the foundation of London. Then we walk up the hill to the Roman Town Hall, past the houses of its wealthy citizens. At the Forum we look at the market and discuss Roman local politics. We proceed through the streets of  Londinium, with its vivid and cosmopolitan street life and to the site of the excavation called ‘the Pompeii of the North’. Then we worship at the Temple of Mithras, and finish with Bread and Circus at the Roman  Amphitheatre. 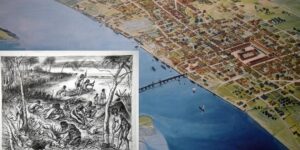 “Hi, Kevin, Thank you for today’s virtual walk.  I was able to access the link with no problems. Your cache of historical pictures, maps, and illustrations is enormous and wonderful, and I was glad to have been given the chance to view them.  I am reminded yet again of why I always return to Britain and to Europe; the USA has many wonderful places and gorgeous scenery, but, let’s face it, we don’t have the history.  The earliest artifact that shows the human influence that I’ve yet seen on this side of the ocean is a 17th-century wooden door from Deerfield, Massachusetts, that shows cuts and scars made by the French and Indian attackers during the Deerfield Massacre of 1704.  Just not the same time scale as the Roman walls and the medieval buildings of Britain.  and not the same level of cultural or engineering achievement. I was not surprised but am saddened that (London?) University is dropping Chaucer and replacing it with a race and gender module.  But it’s a sign of the times – I’m just glad I got my education when I did.  Still remember what a revelation, joy, and adventure it was to be exposed to Milton, the language of the King James Bible, Spencer, John Donne, the 17th-century poets, et al. – the foundations of the English language. A very long answer to your request to let you know how it went.  It went beautifully, in terms both of access and content. Jan M.”

Reserve your place on The Archaeology of Roman London Virtual Walk