Click here to meet your guide – it’s Simon talking about Oscar Wilde, his London, and the tour.

…so said Oscar Wilde, the most original and artistic mind of his age.

Writer, wit, social analyst, gay icon and the first modern celebrity, his extraordinary life has been described as ‘a black comedy in four acts’.

Join award-winning London Blue Badge Guide (and Oscar devotee) Simon Whitehouse as he takes you back in time to the ‘naughty nineties’ (1890s) for a virtual tour of Oscar Wilde’s London. Take a virtual stroll (lilies in hand!) through aristocratic Mayfair & St James as Simon charts Oscar’s extraordinary story, from his meteoric rise to his spectacular fall.

Highlights of this virtual tour will include the stunning Royal Arcade where he purchased his famous ‘green’ carnations, the fabled St James Theatre (site of the opening night of his greatest play ’The Importance of Being Earnest’), and the famous Old Bailey where Oscar found himself at the centre of the criminal trial of the century! 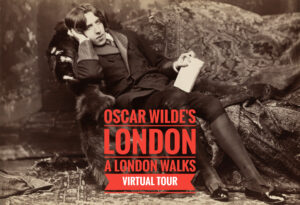 More? Here’s the first few minutes of this tour. We put this clip up as a “podcast”. Go on, have a listen, meet your guide.