Virtual  Myths, Legends & the Origins of London – the Virtual Tour

Meet your guide and sample the tour. In this clip Kevin shows us how to “read” the London Wall, dissects the legendary derivation of the name London, and sheds a lot of light on rarely seen old maps and illustrations.

Archaeologist-guided, this jaunt tours the stories of London’s myths and legends and what they have to say about the origins of London. We compare with archaeological discoveries. 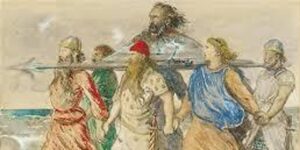 The tour is led by Kevin Flude, a former archaeologist at the Museum of London, who has an interest both in the archaeological evidence as well as the myths and legends of London’s origin.

The tour will tell the story of the legendary origins of London which record that it was founded in the Bronze Age by an exiled Trojan called Brutus. The new City was called Troia Nova or New Troy, which became corrupted to Trinovantum, and then changed to Lud’s Dun and eventually Londinium.  When the Roman system broke down in 410 AD, historical records were almost non-existent, until the building of St Pauls Cathedral in 604 AD.  The two hundred-year gap, sometimes called the Dark Ages, has another rich selection of legends.  The walk will explore these stories and compare with the archaeology findings.

The route starts at Tower Hill, then down to the River at Billingsgate, London Bridge, up to the Roman Forum at the top of Cornhill, into the valley of the River Walbrook,  along Cheapside to the Roman Amphitheatre, and finishing up in the shadow of St Pauls.

Reserve your place on Myths, Legends & the Origins of London – the Virtual Tour